144 megawatts per day released by the Teide. 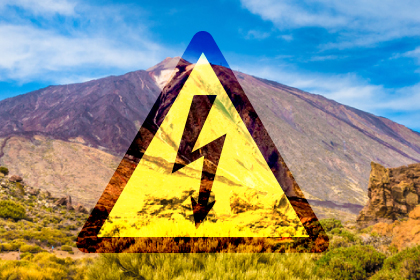 Pico del Teide releases 144 megawatts of energy daily and emits about 400 tons of carbon dioxide into the atmosphere, which is similar to the electricity generated by many geothermal power plants in the world.

This released energy is associated with the dynamics of the transport of volcanic gases from deep zones of the system, which is at about 234 degrees of temperature and 32 atmospheres of pressure, towards the surface.

The results of the investigations also reveal that, between 3,500 and 3,716 meters high, the Teide emits an atmosphere of about 400 tons of carbon dioxide daily into the atmosphere. This amount of gas would correspond to an equivalent emission rate of water vapor in the order of 3,140 tons, if it did not condense before reaching the atmosphere.

The director of the Environment Division of ITER, “the total energy associated with this dynamics of the volcanic gases emitted by the Pico del Teide corresponds to the sum of several energy balances, on the one hand, the energy associated with passing the steam of water and carbon dioxide, which are the two main components of volcanic gases, from 234 degrees and 32 atmospheres to 83 degrees and 0.55 atmospheres, On the other hand, there is also the one that is related to the condensation process of steam. water, before it reaches the atmosphere, and finally, the cooling of that same water vapor. ”

In his opinion, these values are comparable with the energy released by other volcanic systems, such as in the Solfatara area within the Campi Flegrei caldera (Italy), as well as the electricity generated by many geothermal power plants in the world.

These analyzes confirm that even when the Teide does not produce impressive visible hydrothermal discharges, it does not mean that a considerable amount of energy is not being released. “It’s just not obvious, due to the condensation processes that are probably caused by the geometry and the elevation of the volcano,”

With respect to the possibility that geothermal resources can be exploited on the Island, these results suggest that there are likely to be high temperature zones in the discharge areas of this 234 degree hydrothermal system that surround the Teide magma system.